“It’s like we’ve won the World Cup!” Just time to announce the results of the Ukrainian public’s vote from Kyiv, and presenter Pavlo Shylko can’t help but explode with joy, in the small window in the center of the Eurovision 2004 100 million viewers screen. “We were very worried about giving Serbia and Montenegro 12 points, clearly our main rival.” But the Ukrainian vote is last and the chips are already down. It is the local singer, Ruslana, who will win. “It was the general euphoria in the studio”, remembers the facilitator. That year, Ukraine carved out a place for itself on the European map and intends to continue in the grand final on Saturday May 14 in Turin, Italy, as the country has resisted the Russian invasion for over two months.

At home, we love when a plan goes well. “Ukraine had joined Eurovision only a year earlier, at the initiative of a public relations agency commissioned by the Ministry of Culture, with the roadmap to stop the public in relation to communism or Chernobyl”, underlines Paul Jordan, a connoisseur of the great European route of the song. Mission accomplished beyond all expectations. The 2004 winner, singer Ruslana, can sing with a faux fur on her back, but the rest of her very, very low-cut costume matches the dress code of the competition. “It is an image on which Ruslana had worked a lotdescribes Marko Pavlyshyn, head of Ukrainian studies at Monash University in Melbourne (Australia). He wanted to show a new facet of Ukraine, multicultural, associated with globalized pop culture, with the figure of the tough, sexualized, powerful girl “.

The following year, the Ukrainian leaders did not even pretend not to interfere in the competition. The show takes place in Kiev a few weeks after the end of the “Orange Revolution”, which saw pro-European president Viktor Yushchenko win a showdown with his pro-Russian opponent. “We had chosen as the slogan ‘the awakening’* [le réveil, en bon français]details Pavlo Shylko, creator and presenter of the 2005 show. The dominant color was green, a symbol of freshness “. Apparently, it is the largest international event organized in Ukraine since independence. “What struck me was the pride of the people of Kyiv. They babbled three words in English, but they were so happy to welcome foreigners”, recalls Paul Jordan. Opening sign: for the occasion, tourists can enter the country without a visa. Almost twenty years later, the provision is still in force, in peacetime.

Between two songs, we can see an account of the “Orange Revolution”, events led by local celebrities such as the brothers Klitschko and Ruslana (elected deputy the following year *) and, at the end of the competition, President Yushchenko who takes the stage to deliver a prize to the winner. “It was a mistake. The broadcaster, the EBU, then vetoed it, even when Vladimir Putin wanted to do the same, in 2009”, Paul Jordan points out. Without forgetting the choice of the song to represent the host country, Razom Nas Bahato, of the GreenJolly group, anthem of the revolution. “I’ve been in show business for over twenty years, I knew it was a monumental mistakePavlo Shylko sighs. It would have been a hit for a national competition. But at Eurovision, people expect fun! Our politicians who had just come to power wanted to do politics … “ The rappers, in fact, break the chains on stage but lock themselves at the bottom of the table, collecting the worst ranking in the history of the country *.

This is the beginning of political spades against Russia. In 2007, actor Andriï Danylko invented an old lady for her character Verka Serduchka, who blows up the screen. the Guardian erect * its title Dancing Lasha Tumbai such as “the best song to never win Eurovision”. Behind the sequence of abstruse formulas in half a dozen languages ​​points a finer criticism than it seems. “At first glance, it seems that he is making fun of the typical Ukrainiandecrypts Marko Pavlyshyn. For the Ukrainian viewer, it is self-irony; for the Russian, it strengthens his superiority complex. Until the famous ‘goodbye to Russia’ “. During the song, Andriï-Verka swings in fact to “lasha tumbai”which literally means “whipped Cream” in Mongolian. At real speed, live, the whole of Europe listens rather to “Goodbye Russia” he muttered. Pavlo Shylko, co-author of the song, clings to the official version, the same for fifteen years. “It was never a ‘goodbye to Russia’. We just inserted snippets of sentences that sounded funny.”, still defends itself today. Yup…

On the Russian side, let’s play on subtlety. Sometimes we remember in a few words who is the boss in this corner of Europe, as for the song Mom, performed in 2009 in Moscow by… the Ukrainian singer Anastasia Prikhodko, first in her language, then in Russian. Many saw it as a song that advocates loyalty to Mother Russia. Rebelote five years later, with the twins Anastasia and Maria Tolmatchevy who, under the baby’s clothes, sing “One day you will be mine” in their song Shine, a few weeks after the annexation of Crimea to Russia. Did you say “double talk” under the pretext of a syrupy song? Mariya Yaremchuk represented Ukraine that year and still suffocates: “As if Russia were a bringer of peace in the world!”

The room is not wrong and whistled the twins during the semifinal.

“These two guys weren’t guilty of anything, and that was just what Russia was looking for.”

He who is sixth that year – ahead of … Russia – insists: “Using these images was a propaganda trick. I had nothing against these two girls. But I understood the boos, addressed to their country.” The anti-whistle technology is installed since the 2015 edition, to avoid new accidents. However. The break is consummated. An ice age begins between the two countries, which exchanged many points with the public vote. “I avoided talking to the Russian press at all costs. The reporters wanted me to say things to discuss later.”

Off stage, the current still flows. “Filipp Kirkorov [le “Michael Jackson russe”, grand manitou de l’Eurovision dans les pays de l’Est] he asked me to take a picture with binoculars, between two doors. ‘These two girls haven’t done anything wrong, they just want a picture with you. And I said yes. “ Also in 2016, when the Ukrainian Jamala wins with the song 1944 on the deportation of the Crimean Tatars – an indirect way of talking about the news, as she herself later admitted – behind the scenes, she and Sergei Lazarev, the Russian superstar who fails on the podium, do not exchange only superficial smiles: “She had just received an informal award and did not hesitate to strike a pose with him”, says Paul Jordan, who witnessed the scene *. It is among the delegations that the oblique glances are most numerous. “When Jamala won, a member of the Russian delegation, with tears in his eyes, said to me: ‘Have fun with the Ukrainians!'”

If, as in 2005, organizing the competition in Ukraine is a logistical nightmare, on the side of the EBU (European Broadcasting Union)the organizer, is a lesser evil. “Our worst fear was that Russia would win.acknowledges in no uncertain terms Guillaume Klossa, communications director of the association of broadcasters from 2013 to 2018. He continues in more chosen terms: “We could not have prepared for the competition in good conditions. During my tenure, I had placed the promotion of a diversified company at the heart of Eurovision. I am far from sure we would have had a high quality commitment from the Russian authorities. … ”

The level cunning, on the other hand, the Russian authorities arise there. For the 2017 edition, held in Kyiv, Russia offers to send a disabled singer, who had the misfortune to perform in the annexed Crimea. A condition that applies a ban on Ukrainian territory to various foreign personalities, from Gérard Depardieu to Steven Seagal *. “We offered them a solution, says Paul Jordan, who remembers being presented with a fait accompli at the last minute. Let the singer perform live, from Russia, but via satellite. They didn’t want to know anything. Inevitably, the Ukrainians have fallen into the trap. “ No Russia on stage that year, then. No whistles, then. “I’m not sure there would have been”Volodymyr Ostapchuk, presenter of the competition, wants to believe it, still able five years later to recite the rules of voting in one breath in French, one of the official languages ​​of Eurovision. 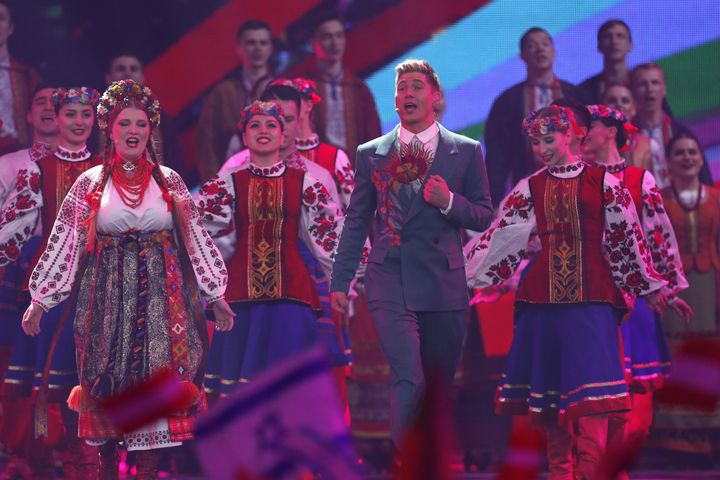 Presenter Volodymyr Ostapchuk dances with traditional dancers on the stage of the second semifinal of Eurovision on May 11, 2017 in Kyiv (Ukraine). (MICHAEL CAMPANELLA / GETTY IMAGES EUROPE)

Not even the Ukrainian president on stage. However, it was not the desire that Petro Poroshenko, the country’s president from 2014 to 2019, was lacking –who nevertheless attended the debriefing meeting the day after the ceremony. “I also taught him to take a selfie with his phone”Sourit Volodymyr Ostapchuk. “It was less necessary for it to appear on screen anyway. For Eurovision viewers, Ukraine is that distant cousin who came home some time ago.” While Russia, absent from the competition in 2017, 2021 and 2022, finds itself pointed at, even sidelined. It is no coincidence that the role of the villain in Netflix’s Eurovision * TV movie is Russian. Ukraine is the bookmaker’s favorite for the 2022 edition with a pipe Stefania of the Kalush Orchestra group, the problem of the interference between politics and spangled songs could arise sooner than expected. Or not, laughs Volodymyr Ostapchuk. “This time the EBU will beg Volodymyr Zelensky to open the competition!”

* Links followed by an asterisk lead to English content.